Are you a Stamp Duty Holiday Ender, Extender or Exterminator? 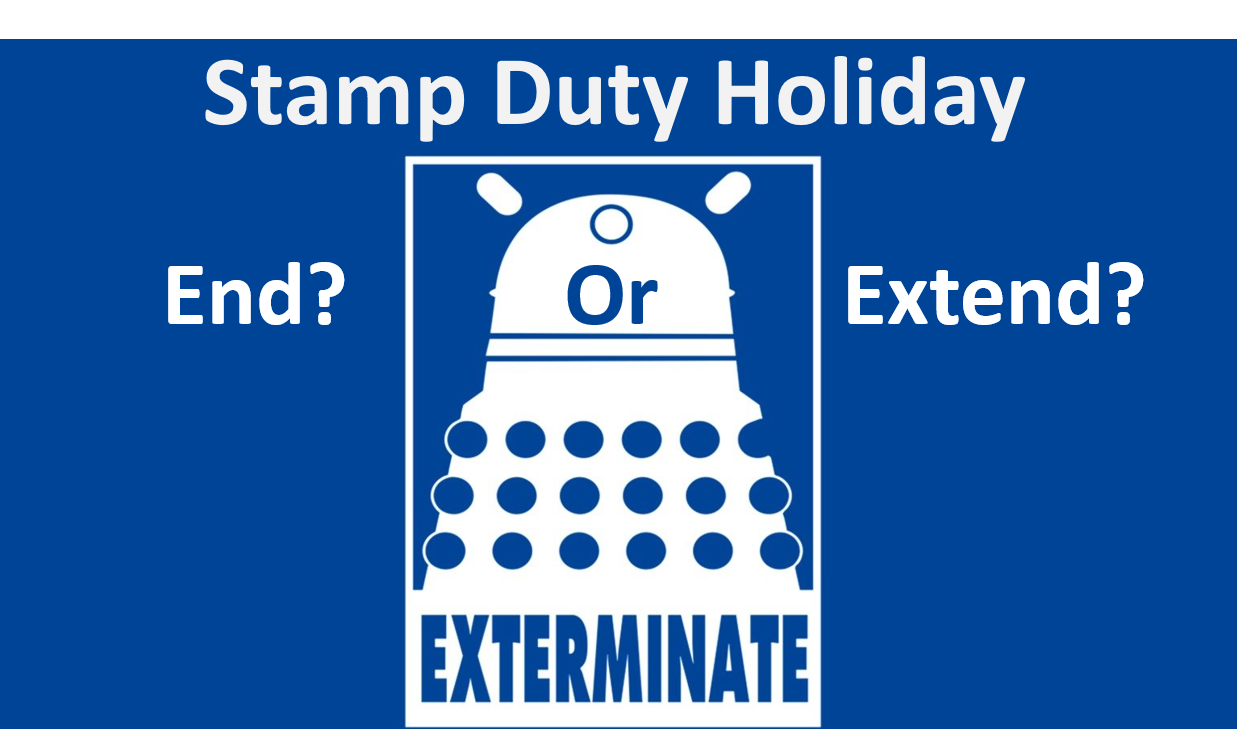 What are the Stamp Duty Extenders saying?

TV’s property guru Phil Spencer sums up the Extenders view succinctly saying: “I think chaos would ensue if the stamp duty holiday did end on a specific date because everybody would be working towards that day”. He worries that if buyers and sellers haven't completed their transactions by 31 March 2021 “the chances are that deals will be collapsing left right and centre, it will just be bedlam.”

Exterminate Stamp Duty rather than extend the holiday

This week, the Daily Telegraph took the Stamp Duty debate to a whole new level when it nailed its colours to the mast by launching the ‘Stamp Out The Duty’ campaign. The Telegraph believes that some 325,000 buyers are caught in a quagmire of delays and risk missing the Stamp Duty Holiday deadline. The Telegraph is at the more extreme end of the extenders scale they are ‘exterminators’ calling for Stamp Duty to be scrapped altogether.

What are the Enders saying?

If Phil Spencer is the spokesperson for the extenders then Henry Pryor is his opposite number for the enders. Mr Pryor’s views on the Stamp Duty Holiday are very clear “There was little logic in doing this in the first place” he says. But what of the extenders claims of ensuing chaos and bedlam? Mr Pryor’s view is somewhat different: “Bottom line is that the world won’t stop spinning and the market won’t crash if the holiday ends when we were all told it would but some people won’t benefit as they’d like to.”

However, some people stuck in the middle and their sale and purchase may fall through because they miss the deadline through no fault of their own? This is where Mr Pryor believes estate agents need to step up to the plate and earn their fees, he says “If an estate agent isn’t able to re-negotiate a maximum of £15,000 on a £500,000+ deal to ensure that a chain goes through then they aren’t much of an agent. Fighting talk, but he certainly has clear views and is happy to stand up and be counted.

The enders see COVID as the enemy, not the end of the Stamp Duty Holiday as Mr Pryor quips “It’s not the housing market that needs a shot in the arm!”

The graph below shows the amount of Stamp Duty Saving by house price for First Time Buyers and those buying their primary residence in England. 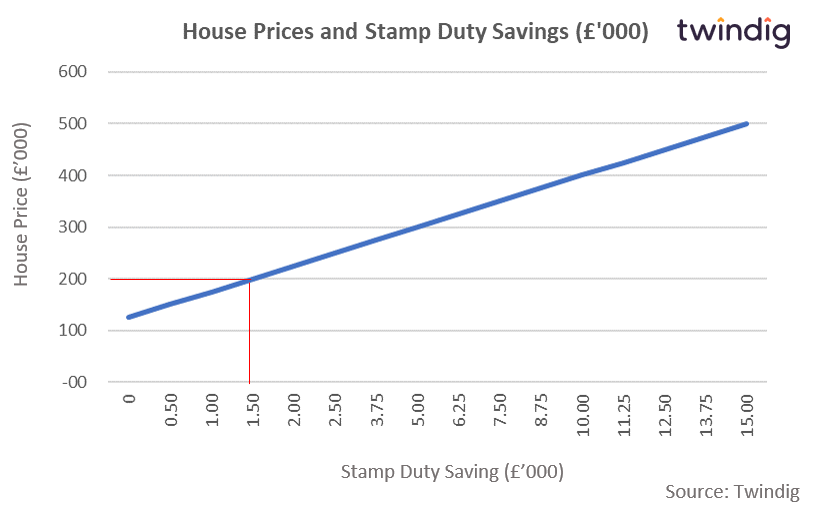 The £15,000 saving is often the figure which gets the headlines, but for most, the Stamp Duty Holiday saving will be considerably less. 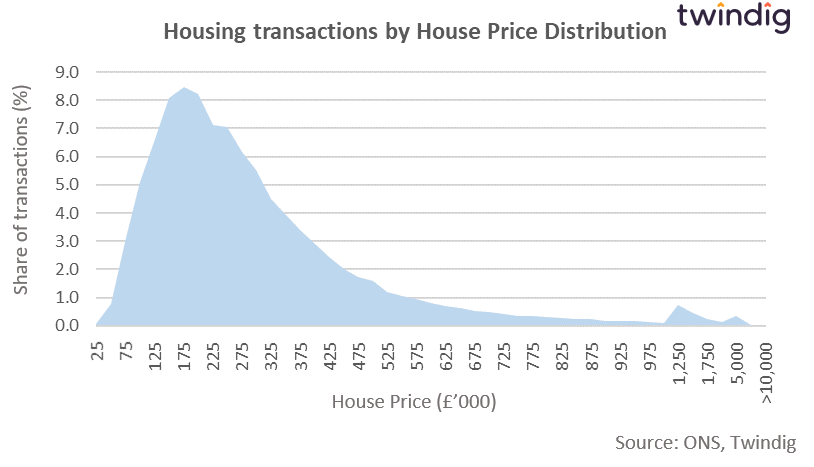 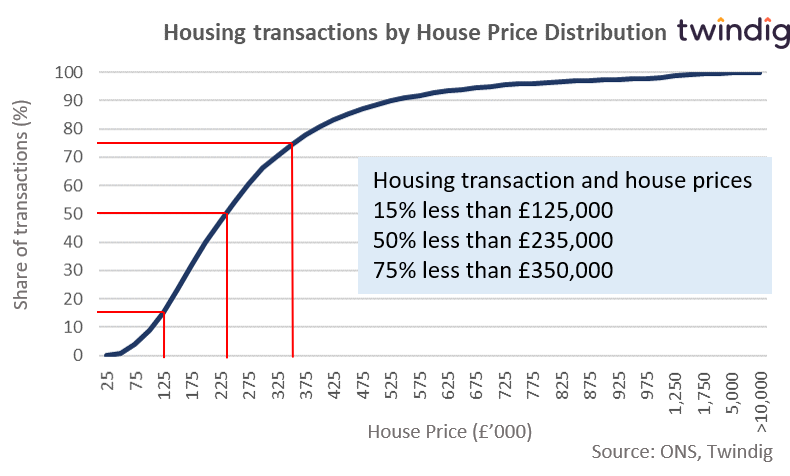 The chart below summarises the Stamp Duty saving by house price and also indicates how many will save each amount of Stamp Duty. As we already mentioned 15.4% save nothing, a further 8% will save £500 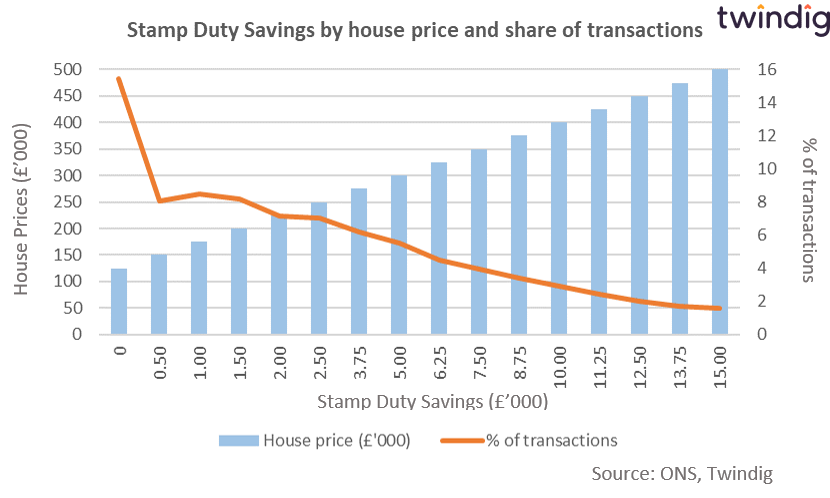 Our final graph shows the cumulative number of housing transactions and the Stamp Duty Savings. The bars on the chart show that for instance, 40% of buyers will save £1,500 or less. The line on the graph shows that as the savings rise fewer and fewer homebuyers benefit from the increased savings.

Will it be bedlam if the Stamp Duty Holiday ends

Firstly we have to remember that buying a home is much more of an emotional decision than a financial one. Once you have your heart set on a home and have invested time and effort imagining your new life in your new home and what goes where in each room, it is not an easy decision to walk away. If it were you are probably buying the wrong house.

I appreciate that cash is cash, but will 50% of the housing transactions fall through because of a change in costs or sales price of less than £2,200 (a swing of less than 1% of the house price). As Mr Pryor suggested earlier perhaps the solution is to renegotiate or even split the difference 50:50. If house prices adjusted throughout the chain, everyone would end up buying the home they wanted to buy or selling the home they wanted to sell.

Would those who need to sell cut off their nose to spite the face? Would they rather have no money in the bank than 99% (or at worst 97%) of what they asked for?

In our view, the extenders view of chaos and bedlam do not pass the sniff test.

The exterminator view will be popular, raise your hand if you would like to pay less tax. However, with record public debt, unemployment rising and tax revenue falling, surely now is not the time to be cutting or eradicating tax for those who can afford to pay it? Should we not be pulling together with those of us who can pay helping out those who can’t, those who have been hit hardest by the full economic force of the COVID pandemic and don’t have the luxury of choice of moving home?