On Monday 1st February at 4:30 pm the UK Government will debate the "Extend the Stamp Duty Holiday for an additional six months after 31st March 2021" petition. As we go to press the petition had received 133,486 signatures. Statistically, this petition has beaten the odds to get this far, but will it get any further? The changes to getting the debate stage are 1 in 490 and 98% of petitions debated fail in their attempt to change Government policy. Will Monday's debate lead to an extended holiday or just a lot of hot air?

1. Why do we need a Stamp Duty Holiday extension?

On 8th July 2020, Rishi Sunak the Chancellor of the Exchequer announced a Stamp Duty Holiday to kick start the UK housing market following a period of lockdown. The Stamp Duty Holiday was to last almost none months - until 31 March 2021. The Stamp duty Holiday meant no Stamp Duty Tax would be payable on homes costing up to £500,000 if being purchased as a primary residence.

It appears whether facing an essay deadline at school or a deadline to buy a home a deadline leads to procrastination and a large rush of activity as the deadline approaches. We are now in the situation where many people may miss out on the Stamp Duty Holiday deadline and have to pay stamp duty that they hadn't budgeted or bargained for. The petition requests an extension to the Stamp Duty Holiday to help out those who will miss the current deadline.

2. Is extending the Stamp Duty Holiday an open and shut case?

No. In our view, the main problem with extending the deadline is that it just pushes the problem of the deadline further down the road. If, after nine months there are many people about to fall into the cracks and miss out, extending the holiday by six months will just lead to a whole new cohort of people in the deadline danger zone.

There is also compelling evidence that the Stamp Duty Holiday has made homebuyers worse off than they were before it.

3. Homebuyers are worse of because of the Stamp Duty Holiday

We agree that this seems an odd statement to make, how can a holiday be a bad thing? Quite easily, unfortunately. In all regions of the country, house prices have increased by more than the stamp duty saving and by quite a long way.

The graph below shows how much more house prices have risen than the stamp duty saving for each region.

In England, average house prices have risen by £15,750. Stamp Duty savings are £3,337, a net increase of £12,414. You might therefore say that the Stamp Duty Tax holiday has led to a house price 'tax' of more than three times the stamp duty saving. A case of robbing Peter to pay Paul, Jane and Mary. 4. How do UK Government petition work?

Any British Citizen or UK resident can start a petition to petition that asks for a change to the law or to government policy.

5. How is the Stamp Duty Petition going?

Not surprisingly Stamp Duty is a popular subject for petitions, we counted that there have been 37 petitions asking for a change to Stamp Duty taxes. Of those 18 were rejected, 13 are open and the remaining four have been closed. 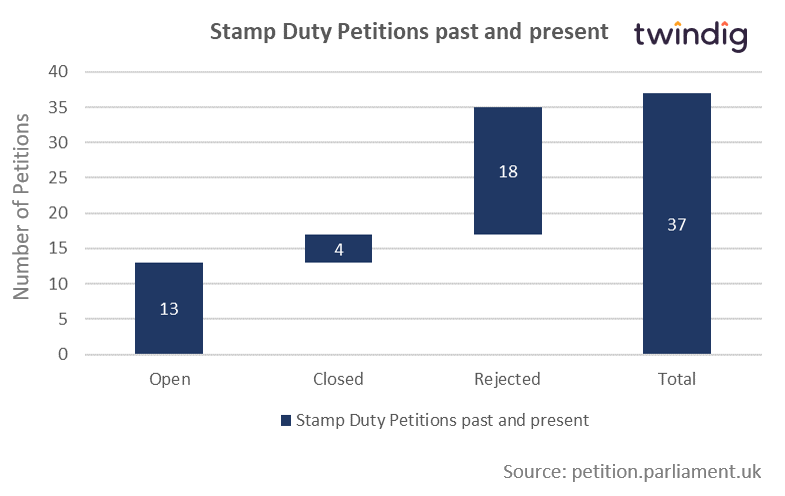 Despite being popular in number only two have reached the required number of signatures to trigger a Government response and only one enough to lead to a debate.

We show the Stamp Duty petitions by the number of votes in the chart below. 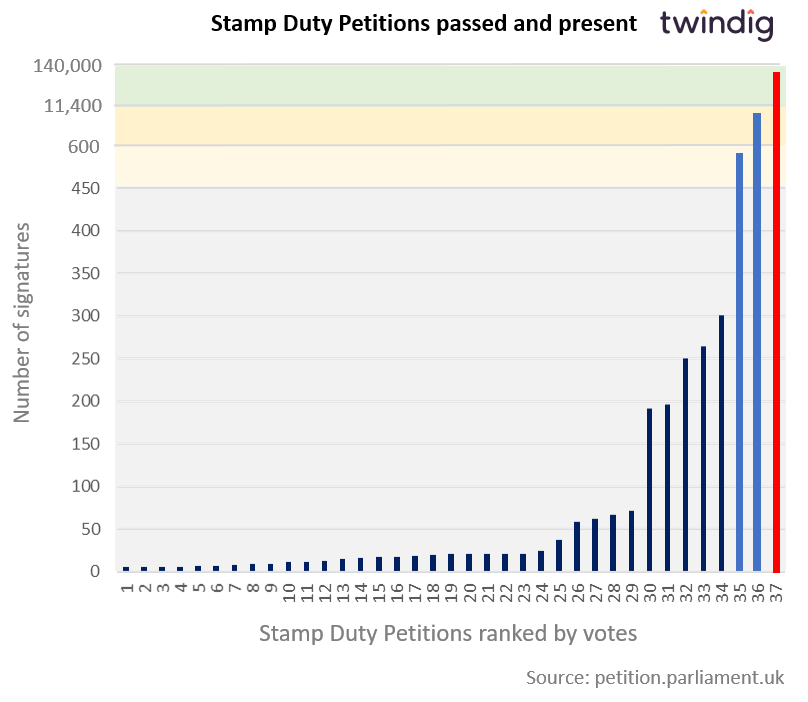 6. What responses has the UK Government already given?

In essence, both responses say the same thing: a temporary Stamp Duty Holiday has been put in place to stimulate the UK housing market. Stamp Duty is an important source of Government revenue and will come back. Homeowership remains an important goal and first-time buyers and those buying new build homes will continue to benefit from lower Stamp Duty rates and Help to Buy.

This petition garnered 11,390 signatures and received the following response on 29 September 2020:

To boost confidence in the property market, the Government temporarily cut SDLT. This means nearly 9/10 people getting on or moving up the property ladder pay no Stamp Duty at all.

The response went on to say:

Stamp Duty Land Tax continues to be an important source of government revenue, raising several billion pounds each year to help pay for the essential services the government provides. All tax policy is kept under review and the views expressed to us are considered carefully as part of that process.

The petition: Extend the Stamp Duty Holiday for an additional 6 months after 31st March 2021 - received a response from Government on the 10th December 2020 after it had collected more than 10,000 signatures.

The initial response from Government was:

The SDLT holiday was designed to be a temporary relief to stimulate market activity and support jobs that rely on the property market. The Government does not plan to extend this temporary relief.

The response went onto say:

As the relief was to provide an immediate stimulus to the property market, the Government does not plan to extend this relief. SDLT is an important source of government revenue, raising several billion pounds each year to help pay for the essential services the Government provides.

The Government is committed to supporting home ownership and helping people get on and move up the housing ladder. When the SDLT Holiday ends, the Government will maintain a SDLT relief for first time buyers which increases the starting threshold of residential SDLT to £300,000 for first-time buyers that purchase a property below £500,000. In addition, a new Help to Buy scheme will be introduced from 1 April 2021. This scheme will run until March 2023.

All tax policy is kept under review and the Government considers the views it receives carefully as part of that process.

7. Does the move to a debate mean a change in UK Law or Government policy?

Unfortunately not. According to the UK Parliament website, petition debates cannot directly change the law or result in a vote to implement the request of the petition. However, they can help raise awareness of the issue and among MPs and the wider public, and put pressure on the Governmennt.

8. How successful have previous petition debates been?

Our analysis of the Parliament petition website revealed that there have been 24,043 petitions, of which: 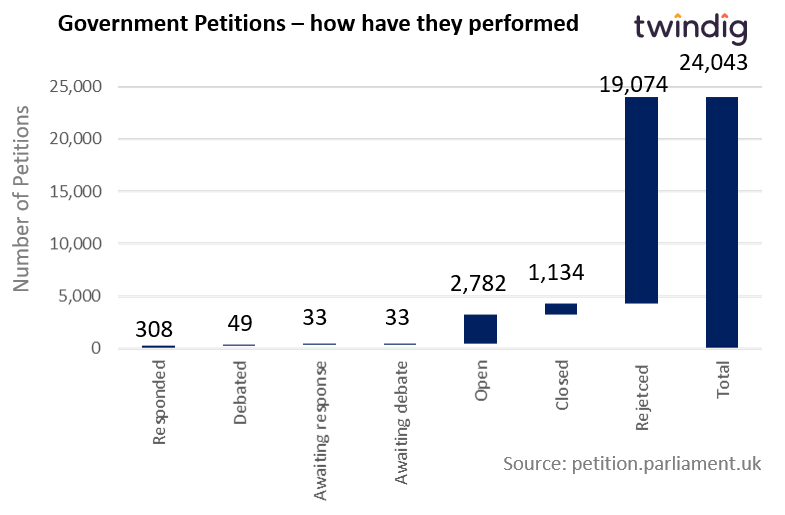 Of the 49 detailed on https://petition.parliament.uk/ which have been debated, we could only find where the petition led to a change in policy.

The successful petition was debated even though it only collected 16,347 signatures was the petition to 'Reduce or scrap the immigration health surcharge for overseas NHS Staff.'

The success rate is therefore 0.004% of all petitions or 2% of those which reach the debate stage.

9. Have any other 'tax-related' petitions been debated?

Yes three others have been debated, none of which have been successful

Give all key workers a 100% tax and Nat. Ins. holiday through COVID-19 crisis