No Summer for the UK Housing market

Like the weather outside my window today concerning housing, the Summer Statement was a bit of a damp squib. The UK Government had a chance to embrace working from home and do whatever it took to rebalance our housing market. Instead, they deployed a Stamp Duty Cut which history suggests will not solve the problems facing a housing market stuck in the doldrums.

I may have missed it, but whilst listening to the Chancellor’s Summer Statement I did not hear him say ‘Whatever it Takes’, he did say we will ‘do all we can’, maybe it means the same thing, but if that is the case why change the message?

We were told that the Summer Statement was a plan to level up, spread opportunity and unite the UK. However, when it came to housing some were made more level than others.

World Bank analysis suggests the COVID Crunch will be the deepest global recession since the Second World War and the broadest collapse in per capita incomes since at least 1870.

As an open economy, the UK is exposed to contractions in global demand, with global spillover effects estimated to account for around a third of the outbreak’s impact on the UK economy.

Taken together, these effects have resulted in a large-scale reduction in total output and ongoing risk to employment. The Office for National Statistics (ONS) estimates that Gross Domestic Product (GDP) in April was around 25% below the level recorded in February. Illustrative scenarios produced by the Office for Budget Responsibility (OBR) and the Bank of England, published in April and May respectively, suggested that the UK economy could be facing its largest annual fall in output in over three hundred years and that the unemployment rate could peak at up to 10%.

Against this backdrop, a temporary Stamp Duty Cut seems to be an unlikely medicine to cure the patient.

Much of the statement focused on getting the young into work, but there was nothing to help them get a foot on the housing ladder. If anything those dreams have taken a step back as their Stamp Duty advantage has been neutralised and Buy to Let investors will benefit from a Stamp Duty Cut (They will still pay a 3% surcharge, but an effective stamp duty rate of 3% up to £500,000, rather than 5% from £125,000-250,000 and 8% from £250,000 to £500,000) so first-time buyers will face more competition for housing.

We need more homes.. but there are no incentives for housebuilders

Whilst the chancellor praised the housebuilding sector he did nothing to help them build more homes this was a missed opportunity in my view. I may have been chancing my arm suggesting Help to Buy for the wider market, but I was surprised that resources were given to a policy that seems not to work (Stamp Duty Cuts) rather than to a policy which achieved its objectives (Help to Buy)

Levelling up may be the goal, but some are more level than others…

Lies, damned lies and statistics. The Chancellor said that the average Stamp Duty saving would be £4,500. This is likely to refer to the arithmetic mean – but these have to be treated with caution. If I earn 50p/hour and you earn £9.50/hour our average wage is £5/hour, in this case, I feel a little short-changed and you feel highly valued. 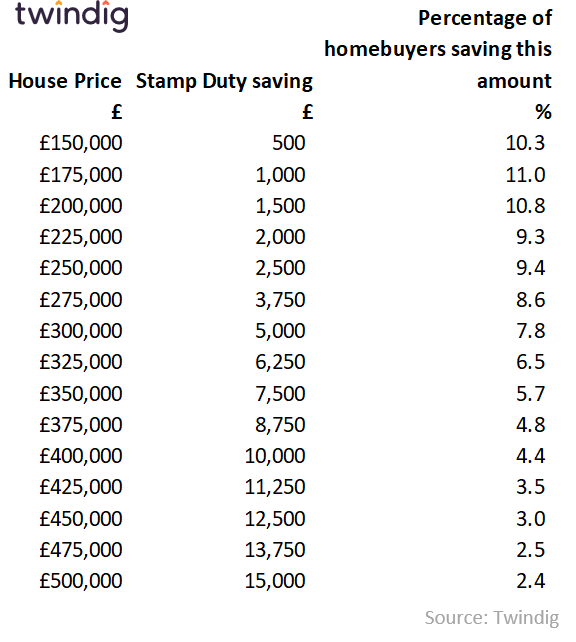 Are house prices the elephant in the room?

When setting the scene of his Statement the Chancellor told us that:

For just over half of home buyers, the stamp duty saving will be less than 1% of the purchase price of their home and even those at the top of the range £500,000 will only save 3% or £15,000. These ‘savings’ could be wiped out by house price falls if any one of the following forecasters is correct. 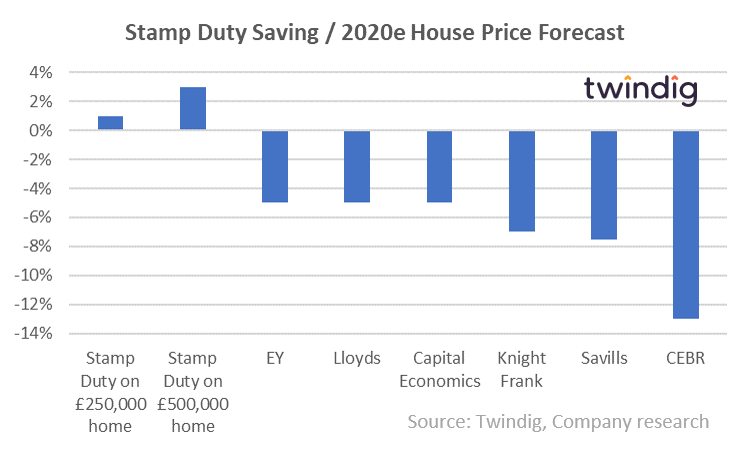